It's not easy to find information on the experimental performance group Tribe I joined in 1969 so I have gathered some quotes and links here to help put a picture together, mostly from the Pram Factory site put together by Sue Ingleton. Tribe eventually merged with the Australian Performing Group at the Pram in the early seventies.

Bill Garner says
"Carol Porter. I met her at la Mama when she was in Tribe. I was well disposed towards Tribe. I liked the people and had quite a bit to do with them especially later when they joined the Pram Factory I sustained that connection. Doug Anders. I hitchhiked to Queensland with Alice when she was five. We were going to visit Lou Costello. At Maleny I found Doug Anders in a converted milking shed, beautiful country, and we went out each morning stark naked with a hoe. We stayed there for a while. Later I heard he was growing herbs or nuts. He did a production of the Hills Family Show. He did my role of Sandringham and he had to get the secret of the mind reading act."

Robyn Laurie says
"Tribe was around with Doug Anders. They were very influenced by Joe Chaikin’s work and did performances at La Mama where the audience looked through little holes in the  wall into the performance and they performed the Plague, dying horribly in audiences’ laps. I was friendly with them but I only got to work with them later on Bert Deling’s film Dalmas. (in 1973) Peter Handke’s Ride across Lake Constance brought some of Tribe into the Back Theatre.  Alan Robertson was directing, Carol Porter and Red Symons and Jane Clifton were all performing.  Alan broke his leg in a motorcycle accident in the last week or so before it opened and I stepped in to get the show on. It was a great production."


Richard Murphet says
"When I returned to Australia in 1970, the APG had moved to the Pram from La Mama and the kind of work that was being done - the shows investigating the various aspects of Australian history - were not the type that I could at that time relate to. So my connections then were to the surreal improvisations of Tribe which were full of crazy humour and always seemed to hover between panic and terror. The people I got to know through Tribe were Alan Robertson, Fay Mokotow, Frank Starrs9, Jane Clifton, Carol Porter and Bob Daly."

Jane Clifton lists
"TRIBE - experimental theatre group directed by Doug Anders and which performed at La Mama, the Pram Factory and in the streets. ( 1969 - 1972.) Co-directed A Ride Across Lake Constance by Peter Handke at the Pram Factory.

Rob Tillet (from the Adeaide band Red Angel Panic) says
Viet Rock was a play performed at Adelaide University by in 1969,
directed by Doug Anders, featuring among others Margot Nash. Doug
(originally from Brisbane I think) had a theatre group called Tribe,
which went on to greater things in Melbourne. I wrote the music or most
of it, as it's a bit blurry now (if you can remember the 60's you
weren't there etc etc). It was based on the US play, but Doug's method
was to form a group that then more or less reinvented the script (if
there was one). In fact the Red Angel Panic was first formed in 1968 to
work with Doug in an absolutely incredible piece called Rites
Underground, which was performed at Theatre 62. This led to us forming a
theatre/poetry/dance performance group called Holocaust (an Adelaide
version of Tribe), and we put on some plays here and there, published
magazines, did some poetry readings, and various street theatre events,
along with a vast amount of revolutionary fervour. We were known as the
"Psychedelic Left" Hahaha. It was always a spiritual journey for me,
rather than a political one.

Mic Conway ( Captain Matchbox ) says
In the early days I’d worked with ‘Tribe’. Tribe was a group that were weaving in and out of the areas that I yearned towards and with people like Alan Robertson, Doug Anders etc. I found the basis of my future work. In one of our performances I remember we were once headlined in Truth newspaper. There was Margaret, a woman from Tribe, who was playing a vamp on a sofa and all the guys walked in as Charlie Chaplin and had (simulated) sex with her to the song, ‘Who walks in when I walk out?’ Truth wrote it up as ‘Sex in Rock shows!’

"In Brisbane when I was a student we had The Tribe and Doug Anders and there were all the influences from Europe and America. We don't call them group gropes any more; we call them crutch and armpit exercises. You would be naked from top to toe and have your nose up someone's private part."

Stephen Cummings writes about Tribe in his memoir - Will it be Funny Tomorrow Billy
Tribe's leader/director Doug Anders was his english teacher and as a school boy he often used to visit the big hippy house where Tribe members lived in South Yarra.

Tribe is mentioned in Adelaide University Drama Society archives
Doug Anders and the Tribe - 2 copies
"Tribe was in existence before I joined in 1969 and had sister groups in Adelaide (Margot Nash) and Brisbane (Bob and Barb Daly)
One hot summer (must have been 1970) we took our big cast production of Megan Terry's Viet Rock and performed it on the campus of Adelaide Uni." 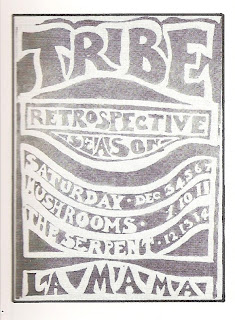 Carol Porter has the best memory on Tribe:
"Tribe was where I began. Alison Ware and myself went to a summer school of drama at Brighton Girls School where, initially, Jim Sharman was teaching the course, but then Jim had to leave to do something else so Doug Anders took over the second half, and it was out of that that we formed the Melbourne Tribe. It was a totally new concoction from the Queensland original. Doug Anders stayed on in Melbourne and  the group  that formed around him included Bob Daly, his wife Barb, Fay Mokotow, Jan Cornall, Alan Robertson, Bruce Spence- who was with me in art school at RMIT and myself. The first show we did was ‘Saturday’ by Barry Mc Kimm at La Mama, that was the one that was made up from newspaper stories and ‘Programme A and B’, which consisted of ‘Serpent’ and ‘Viet Rock’, and we subsequently took that show to Adelaide. The cast by then included Jude Kuring and Jan Bucknall (who is now in America), Bruce Webster, Jane Clifton, Lutz Presser, et al.

A whole stream of people who eventually were going to veer into the Pram kept working at La Mama for a number of years. Bob Thorneycroft and Joe Bolza did ‘My  Foot, My Tutor’, and Fay Mokotow did a  production of ‘Punch and Judy’ with Michael Price and Alan Robertson. I think it was on Fay's initiative that we did  Peter Handke’s ‘Ride Across Lake Constance’, she’d read the script in a TDR and she really wanted to put it on. I remember we went to an APG meeting and asked if we could do it in the Back Theatre Space. ‘Lake Constance’, in ‘73 was the first time I performed at the Pram. The cast included Red Symons and Jan Cornall. I remember it was a gorgeous set, Stephen someone from RMIT who was a friend of mine did the set. Just before ‘Lake Constance’, I was performing with bands alongside the work with Tribe. Then I had a break. I got married to Bruce Woodcock the musician who lived in a double decker bus. I don't know why I got married, maybe because it was something to do. It lasted eight months and then it was over.  By then I had lost touch with Tribe, who had gone on and done other things. Later Doug Anders moved to north Queensland and lived on a commune for twenty years. He came down to Melbourne a couple of years ago and we had lunch but I didn't connect with him after that."

Jan Cornall says
In 1967 I was studying Speech and Drama at Melbourne Teachers College. Peter Green and Max Gillies were among my tutors. I flunked all my subjects except Drama (got an HD) and decided to go to a theatre summer school run by Jim Sharman and dance guru Margaret Barr.There I met Doug Anders, Joe Bolza, Carol Porter, Alison Ware and others and we formed the Melbourne chapter of Tribe. There were already cells in Brisbane (Bob and Barb Daly and others) and Adelaide (Margo Nash). Doug was the leader and asked for total committment. He didn't really need to ask. We were happy to spend all our week nights and weekends improvising and rehearsing.We did a lot of Artaud inspired guerilla/street theatre and did our first theatre show, Saturday, by musician Barry McKimm, at La Mama in 1969 (see cast below). The script consisted of headlines from newspapers which were written on a black board and acted out in repetition.One of the headlines was about a bikie gang doing bad things. We found some real bikers who rode their big loud motorbikes up to the carpark outside, banged on the tin fence and terrified everyone inside. Allan Robertson was one of the bikers. Bruce Spence was in it, Jude Kuring, Jane Clifton and more (see below).

We were spending all our time together.Doug, Alison and Joe rented an old Toorak mansion. Some people lived in La Basa. I moved into the second Tribe mansion in South Yarra with Alan Robertson, Fay Mokotow, Doug and numbers of others who came and went including Paul Bailey, Bill Doblo. Around the same time the APG - Australian Performing Group - Kerry Dwyer, Graeme Blundell, Allen Finney, Bill Garner, Meg Clancy, Peter Cummins and many more, were resident at La Mama. We came together for some workshops and to lead the Vietnam Moratorium marches with street theatre.

I left Tribe in 1971 to go out teaching and worked that year with Syd Clayton at La Mama in Hands Down Gourds.In 1972 I went travelling to the Adelaide Festival with a bunch of Melbourne poets including Chris Mann (we became Allen Ginsberg's unofficial entourage). I went north for a year or so and when I came back Doug had split and most of Tribe were doing work at The Pram Factory. I acted in the Ride Across Lake Constance by Peter Handke (which could have been the last official Tribe production), opposite Red Symons and Carol Porter and the cast mentioned above, in the Back Theatre at the Pram. It was a brilliant production seen by so few (performed in the dead of winter with no heating). I decided to give up theatre and concentrate on music. I took off for a four year stint overseas.When I got back former Tribe members were either working at the Pram Factory or doing their own thing.
SATURDAY-Barry McKimm.                                                                   feb 1969
LA MAMA
Dir: Doug Anders. Cast: Doug Anders, Joe Bolza, Fay Mokotow, Carol Porter, Alan Robertson, Jan Cornall, Alison Ware, Jane Clifton, Lutz Presser, Bruce Webster, Bruce Spence, Jenny Jones, Judith Kuring, Jan Bucknall.

Art Gallery Happenings including performing excerpts of the Serpent at the opening of the Victorian Art Gallery main hall.

Working with bands at The TF Much Ballroom including Spectrum and others.

RMIT Show - an experiential performance involving tons of soil in a basement.

Melb Uni Event- a plastic experience extravaganza where you crawled through plastic tunnels and slid into a pond of jelly  - at Melb Uni swimming pool.


This information has been gathered by Jan Cornall from linked websites.